When the national library of Luxemburg published in 2018 the tender for the move of their entire inventory of books and archives, dispersed over several locations in Luxemburg, to their new library building on Kirchberg, not many companies thought they could take on the challenge.

As the task was immense and asked for quite some significant resources, STREFF partnered up with 4 moving companies from Luxemburg and Germany to realize the work that was to be done.

Over a period of 4 Month, 32 movers and packers, with the help of up to 6 trucks, 100 moving dollies, 150 file trolleys and 150 rolling transport boxes, transferred 70 km of books and archives from the old Library building in downtown Luxemburg and other locations scattered thorough Luxemburg to the brand new Library building on Kirchberg.

The magnitude of the project asked for a sophisticated and well thought through plan and sometimes out of the box thinking, in order to meet the asked deadlines and standards.

One of these planning details was for example to install an outside construction site elevator to move the file trolleys in and out of the old library building a lot faster.

This was a necessary undertaking, as without such an installation, all the books would have needed to be packed in boxes and carried down manually, which would have required, either a lot more time or a lot more manpower. 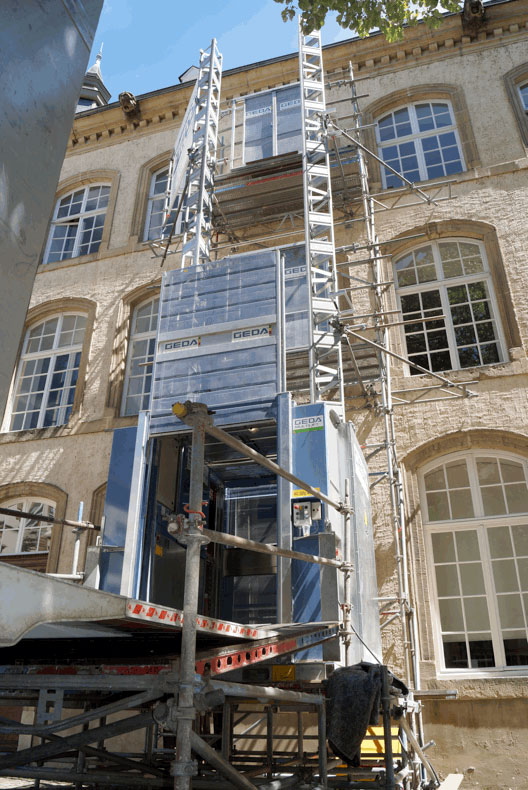 A second out of the box solution which needed to be implemented was the installation of a crane in order to move a significant number of file cabinets out of the upper floors of the old building.

For sure could they have been carried down the stairs but this was the by far more efficient method.

In the end, with the help of those out of the box solutions, the expert personnel on site and the know-how of the different involved companies, the move was completed in the agreed upon timeframe.

As an established moving company, STREFF gets asked regularly to provide services for various Luxembourgish institutions such as the CSSF. The size and the know-how of STREFF allow for a certain amount of flexibility when it comes to big office moves, which is the main reason why STREFF gets picked to do these moves.

The CSSF asked STREFF initially in 2019 to move 330 employees with their office furniture from one building to the another, which as time went by became a lot more as STREFF allowed for flexibility in the planning of the work which needed to be done.

Over a period of several months, STREFF provided basically the resources to the CSSF that allowed them to continue working at full capacity while small groups of people were moved at a time.

When requested, STREFF provided on weekends the personnel to transfer large amounts of furniture at once to guarantee, that on Monday mornings employees could get back to work.

Evidently such moves require a strong coordination between the moving company and the in house IT department, as they need to be able to follow the speed of the move. One disconnected computer in one building needs to be reconnected in the other building in a matter of hours.

As employees, IT-departments and buildings more often than not are not ready to be moved when the date arrives, STREFF always tries to accommodate the last minute changes where possible.

De Verband is a very important organization that supports mainly the local farming industry in Luxemburg. They are the provider of spare parts for tractors and other framing equipment and act as an advisor for all questions related to farming in Luxemburg.

In 2019, “De Verband” asked STREFF to plan and execute the move of their spare parts department in the north of Luxemburg.

This was a new challenge, as the demanded service was not something STREFF does on a regular bases.

The move of the spare parts warehouse of “De Verband”, asked for a very meticulous organization and planning of the move, so STREFF went to the extend to do multiple inspections of loading and unloading addresses with the employees that were to be the team leaders of the move.

Together with the team leaders, the office move department established the plan of how to best realize the move. They defined the resources (equipment, trucks,…) that would be necessary to accomplish the move.

As it was all spare parts that had to be moved, Streff had to keep in mind, that a certain order of the peace’s to had to be respected during packing, loading and unpacking as the customer had asked for the spare parts to be rearranged in the new building as they had been found in the old one.